Climate suit against RWE: Regional court will decide on December 15 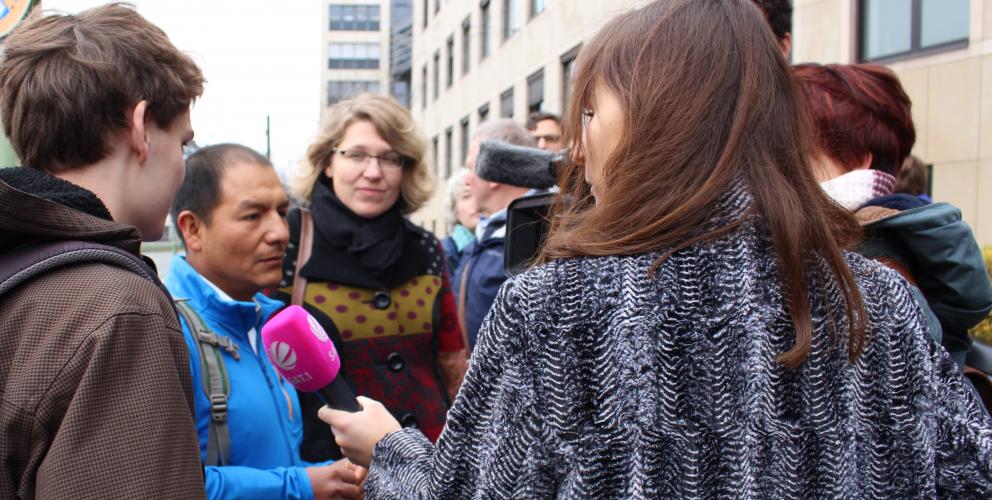 After the initial hearing at the regional court in Essen, the civil chamber will announce on December 15 whether the first European civil court climate case against a big emitter will proceed to the evidentiary phase. The Peruvian mountain guide Saúl Luciano Lliuya wants to achieve that the energy giant RWE covers a share of the preventative measures against climate effects needed in his hometown.

Essen (November 24, 2016). In the “climate suit” of Peruvian mountain guide and small farmer Saúl Luciano Lliuya against RWE, the regional court in Essen has announced that it will decide on December 15 whether the suit will proceed to the evidentiary phase. Thus it remains unclear whether, for the first time, a German civil court will probe in detail the question to what extent big contributors to climate change must pay for the costs of preventative measures against the risks that others face in the course of global climate change. The claimant Saúl Luciano Lliuya and his attorney Dr. Roda Verheyen (Hamburg) are optimistic. “In an open proceeding, we laid out why our claims are valid and legitimate, and why this is a matter that the regional court must consider”, says attorney Roda Verheyen. “Therefore, we now hope the case will proceed to the evidentiary phase.” Saúl Luciano Lliuya, who travelled from Peru in order to attend the initial hearing, adds: “Those who caused climate change, like RWE, must finally take responsibility for the consequences of their emissions. I hope that the judges give us the opportunity to show in greater detail the dangers that we have to live with because of the emissions that companies like RWE produce, and that we need protection.”

This is the first proceeding of this kind in Europe. With this civil suit, which was filed exactly one year ago, Luciano Lliuya seeks that RWE cover a share of the costs for preventative measures at the glacial lake overlooking the Andean town of Huaraz in accordance with its contribution to climate change. Many of the town’s 120,000 inhabitants, including the family and community of Luciano Lliuya, are threatened by an acute risk of flooding due to the accelerated melting of the glaciers that is caused by climate change. Up to 50,000 people live with this threat. However, the law firm representing RWE, Freshfields Bruckhaus Deringer, has dismissed the claim as invalid and unfounded.

The energy corporation terms itself the largest single CO2 emitter in Europe. According to a study from 2014, the company is responsible for about half a percent of all worldwide greenhouse gas emissions from human activity since the beginning of Industrialization. “RWE insists: when damage is caused by one party, civil law is applicable. When it is caused by many, the people affected cannot enforce their rights. In our eyes, this an argument for collectively rejecting responsibility”, says Klaus Milke, chairman of the environment and development organization Germanwatch, which is supporting and advising Luciano Lliuya in his efforts. Even though RWE is just one contributor among many: Saúl Luciano Lliuya demands that RWE cover its fair share of the costs for preventative measures necessary for Huaraz. About 17,000 euros are at stake – an important first step.

The International Panel of Climate Change (IPCC) traces the ongoing deglaciation in the Andes back to climate change. In Huaraz the danger is particularly imminent: The glacial lake Palcacocha, which lies a few miles above the town, has grown fourfold just since 2003. Due to climate change, the risk that large chunks of ice break off from the glaciers and fall into the lake is rising. Then, a devastating flood wave would crash into the valley below. In order to reduce the threat permanently, large amounts of water would have to be continually siphoned from the lake with a new drainage system and the dams at the lake would have to be reinforced or renewed.

“Those who have caused these hazards must also cover the costs for protecting the people affected by them”, says Klaus Milke. “The case of the tobacco industry showed: only when these types of civil suits succeed does the pressure on policy-makers grow to the point that we see real change. That is what we are hoping for from this case.”

This press article was originally published by Germanwatch on November 24, 2016.